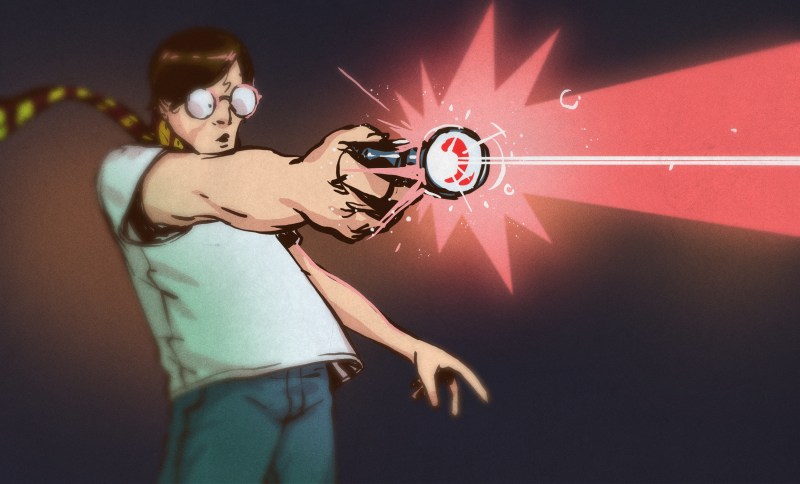 One of the more popular social activities in China is group dancing in public squares. Often the pastime of many middle-aged and older women, participants are colloquially referred to as “dancing grannies.” While the activity is relatively wholesome, some dancers have begun to draw the ire of their neighbourhoods with their loud music and attempts to dominate the use of public parks and recreational areas.

Naturally, a technological solution sprung up promising to solve the problem. The South China Morning Post has reported on a “stun gun” device which claims to neutralise speakers from a distance, in an effort to shut down dance gatherings. The device created a huge stir on social media, as well as many questions about how it could work. It’s simpler, and a bit less cool, than you think.

A Sequel To The TV-B-Gone

The devices are hard to find concrete details on, particularly in the English world. Listings on Western-facing websites like eBay and Aliexpress have been deleted with remarkable speed. It only adds to the mystery around a device that can supposedly shut down audio device at long range.

However, dig deep enough, arm yourself with some translation apps, and talk to a few friends in China, and you’ll learn the truth. The devices are not some all-powerful stun gun that can blast speakers into submission. Instead, they are but simple infrared remote controls, built into a familiar flashlight-style housing. Combining a powerful infrared LED and a lens to focus the beam means the devices can shoot infrared signals over 50 m in ideal conditions. It’s then a simple matter of modulating the infrared LED with the right signal. Have the LED match the “power off” command used by remote controls for the common portable PA speakers used by the dancing grannies, and you’re in business.

It’s the same concept as the famous TV-B-Gone. Essentially a one-button universal remote that launched over a decade ago, the TV-B-Gone had an infrared transmitter and simply spewed out “off” commands for a wide variety of popular televisions when you held the button down. These speaker shutdown devices use exactly the same methodology. The only differences are that they fire codes to shut off portable speakers, not TVs, and they’re built in a package designed to work at longer range.

Funnily enough, Hackaday featured a very similar device years ago. It combined a simple TV-B-Gone infrared code sender with a 1 W IR LED packed into a compact torch housing. It was designed for TVs, not PA systems, but the concept is the same.

The devices are most readily found on Taobao, such as these listings we turned up in the last few days. However, it was the deleted Aliexpress listings that were most honest about how the devices worked, noting they only worked with outdoor PAs that used infrared remote controls.

Countermeasures are obvious once one knows how the devices work. A simple strip of opaque tape over the PA’s infrared receiver would be enough to render the devices ineffective, at the cost of losing the functionality of one’s own remote.

The devices will likely remain hard to find in the West. Government authorities look dimly upon anything marketed as a “jammer” or “interference” device, even if these are really just odd remote controls. Whether they’ve been involved, or eBay and Aliexpress have just been proactive about removing listings is unclear. Regardless, the market for these device outside of China is likely small.

However, within China, there’s been much talk on social media of finally wresting back control from leagues of dancing grannies that take over neighbourhoods on the regular. Whether these devices prove effective at bringing peace to neighbourhoods is unclear; it seems just as likely they may inflame tensions instead.

In any case, if you’ve got a better idea for a device that could shut down a broader spectrum of amplifiers, share it below. Alternatively, give us your best solutions to the conflict between the grannies and their neighbors. Peace in China depends on it!

[Thanks to Dashiell Dunn for assistance in researching this article.]