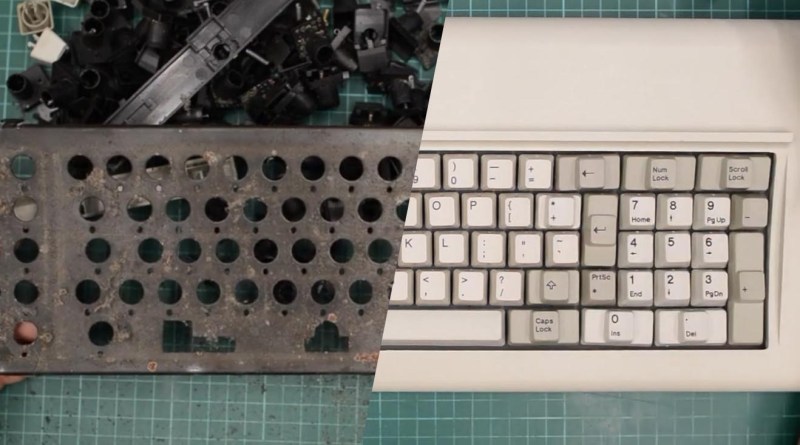 The IBM Model F keyboard should need no introduction. Famed for its buckling spring key mechanisms, the Model F is lusted over for its satisfying typing experience and Armageddon-proof build quality. First introduced in 1981, many of these keyboards will now naturally require basic maintenance. However, [Epictronics] recently went a step further and restored a Model F to like-new condition.

Missing keycaps were the least of his worries, as both new and old replacements are relatively easy to come by. [Epictronics] was more concerned about the forty-year-old foam sandwiched tight inside the keyboard, most likely having long since degraded. Apart from being plain gross, the decaying foam has the potential to foul the buckling spring switches. After taking apart the body and removing the ‘disgusting’ foam pad, a replacement was forged from neoprene and a handy-dandy hole punch.

Disassembly of the keyboard case required the gentle touch of a mallet, and reassembly needed similarly inappropriate tools. As demonstrated in this vintage clip from IBM, keyboard assembly was (and still is) performed automatically by robots, driven by an IBM Series/1 minicomputer. These robots were equally impressive for their precision and strength. Without access to IBM’s aptly named ‘closing tool’ and various other robotic helpers, [Epictronics] had to settle for pool noodles and a comically large clamp during reassembly, mixed with sheer determination.

Other neat tricks in the video include applying heat to reform the coiled keyboard cable, and using car polish to clean the case plastics. The latter has the potential to make things worse, so a delicate hand is needed to maintain the textured plastic.

We recently covered another Model F restoration, and it’s exciting to see so many dedicated hackers keeping these keyboards clickety-clacking well into the 21st century.