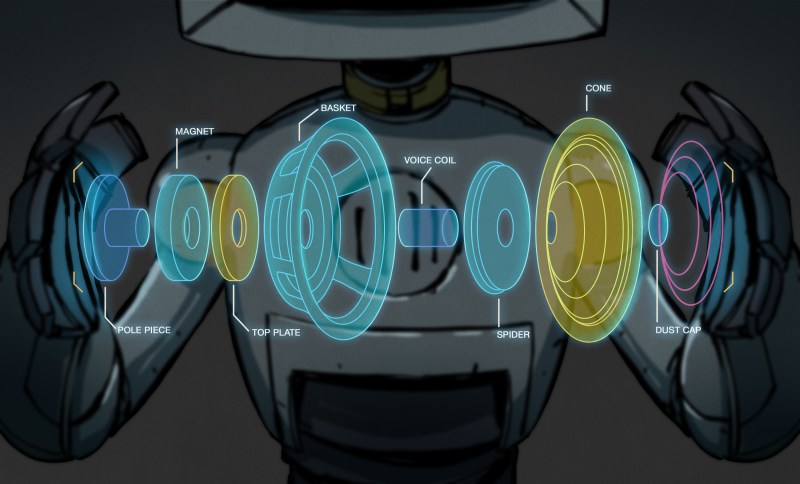 As we’ve started out on our journey through the world of Hi-Fi audio from a strictly practical and engineering viewpoint without being misled by any audiophile woo, we’ve already taken a look at the most important component in any audio system: the listener’s ear. It’s time to move down the chain to the next link; the loudspeaker.

Sound is pressure waves in the air, and the purpose of a loudspeaker is to move the air to create those waves. There are a variety of “exotic” loudspeaker technologies including piezoelectric and electrostatic designs, here we’ll be considering the garden variety moving-coil speaker. It’s most usually used for the large bass or smaller mid-range drivers in a typical speaker system.

A moving coil speaker has a lightweight cone suspended by a flexible coupling round its edge, with a coil of electrical wire near its point that sits within a powerful magnetic field. Applying an electric current in one direction moves it outwards, in the other direction inwards. Applying an alternating electric current to it causes it to vibrate, and the resulting air movement causes creates sound. There are as many variations on the basic idea as there are loudspeaker designers, but it’s usual for the cone and flexible coupling to be retained in an open-backed metal frame that also holds the magnet, and for the cone to be made of some form of stiffened paper.

Try to play a loudspeaker sitting in free air, and you’ll find its sound to be underwhelming. The speaker is producing pressure waves from the rear and from the front, 180 degrees out of phase and interfering with each other. The result is something of a mess, and especially the lower frequencies will cancel out. Some means of isolating front sound from rear sound is called for, and that comes in the form of the enclosure, or speaker cabinet.

But you don’t have an infinite wall. If you make the wall ever smaller and start to compensate for any sound leaking its edges by curving it around the back of the speaker, what you end up with eventually is a sealed box with the speaker mounted in its front, which starts to look a lot like the speaker enclosures with which we are all familiar. There are variations on this theme that employ tuned ports in an attempt to harness some of that sound from the rear of the speaker and phase shift it to augment the front sound, but this sealed-box infinite baffle enclosure remains the most common type of loudspeaker enclosure because it is simple to build and delivers good results.

There’s More To A Good Speaker Than Just A Box

For most speakers of the type you will encounter, you can make an enclosure of the right size to contain them and they’ll sound pretty good. But unless you are very lucky, you won’t be operating the speaker with an enclosure of the right volume to fulfil its potential to the maximum. Loudspeakers are modelled mathematically using a set of parameters describing their various electrical and mechanical properties, named the Thiele-Small parameters for the two researchers who codified them. Using these parameters the optimum enclosure can be calculated for a given speaker, resulting in the best quality sound for that device. Sadly it’s often the case that cheap speakers don’t have any published Thiele-Small parameters, but should your chosen ones have them you can use them to get the best results.

It is important that the material from which the speaker enclosure is constructed is appropriate, because the wrong choice can seriously degrade the sound. A speaker enclosure should be constructed of a material that won’t resonate or flex at the frequencies the speaker is producing, so ideally it should possess significant mass and rigidity. It needs to contain the sound, after all. For this reason many decent quality speaker cabinets are made from MDF, as it has those qualities and is reasonably inexpensive. Even with a good enclosure though, it is also common for it to be partially filled with acoustic wadding, a lightweight fluffy material designed to damp reflections and resonances within the enclosure.

Because speakers have mass, the bigger they are, the less easily they accelerate. Big speakers that are good at reproducing lower frequencies are called woofers. Mid-range speakers and the high-frequency tweeter are designed specifically to resolve different  frequency bands. A set of LC filters referred to as a crossover network then takes care of feeding only the desired content to each cone.

Finally, there is a breed of speaker that appears to defy all odds and sound good despite being in what would appear a wildly inappropriate enclosure. On my desk I have a Bluetooth speaker that cost me around $25 and is about the size of two packs of cards, yet it sounds far better than I would expect from a device of that nature. The answer lies in electronics. In fact it’s a deeply flawed speaker but one whose built-in amplifier contains a DSP programmed to compensate for those flaws in the audio. Don’t be tempted to replicate a small speaker of this nature unless you are also a DSP wizard, because it will inevitably not replicate the sound of its commercial equivalent.

Speakers don’t have to be complicated, but there’s more to it than merely 3D printing a box that looks good. But in making fancy speaker cabinets, we enter the law of diminishing returns  in a big way, and it’s debatable once a certain price point has been passed whether further budget extensions deliver their money’s worth. Ultimately it comes back to the physics of getting the pressure waves to your ears — if a pair of decent speakers sound good to you, then perhaps you’ve got your money’s worth without spending too much.

The next step in the Hi-Fi chain is the cable connecting the speaker to the amplifier, but since we’ll be looking at cables as a whole at a later date it’s better instead for our next instalment to take a look at amplifiers, and what makes a good one.