Inverted Pendulum Balanced On A Drone 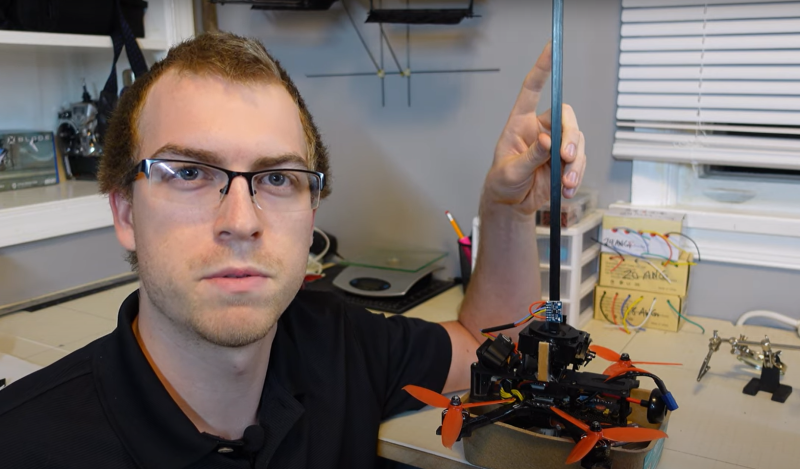 [Nicholas Rehm] works during the day at the Applied Physics Laboratory at John Hopkins, Maryland, so has considerable experience with a variety of UAV applications. The question arose about how the perseverance mars rover landing worked, which prompted [Nicholas] to hang a rock under his drone, attached via a winch. This proved to be interesting. But what is more interesting for us, is what happens when you try to attach an inverted pendulum to the top of a drone in flight? (video embedded, below)

This is a classic control theory problem, where you need to measure the angle of the pendulum with respect to the base, and close the loop by calculating the necessary acceleration from the pendulum angle. Typically this is demonstrated in one dimension only, but it is only a little more complicated to balance a pendulum with two degrees of freedom.

[Nicholas] first tried to derive the pendulum angle by simply removing the centering springs from an analog joystick, and using it to attach the pendulum rod to the drone body. As is quite obvious, this has a big drawback. The pendulum angle from vertical is now the sum of the joystick angle and the drone angle, which with the associated measurement errors, proved to be an unusable setup. Not to be discouraged, [Nicholas] simply added another IMU board to the bottom of the pendulum, and kept the joystick mechanism as a pivot only. And, as you can see from the video after the break, this indeed worked.

The flight controller is [Nicholas’] own project, dRehmFlight (GitHub), which is an Arduino library intended for the Teensy 4.0, using the ubiquitous MPU6050 6-DOF IMU. [Nicholas] also made an intro video for the controller, which may prove instructive for those wishing to go down this road to build their own VTOL aircraft. The code for pendulum experiment is not available at the time of writing, perhaps it will hit the GitHub in the future?

For some more inverted pendulum fun, do check out this simple linear sled. We did cover dRehmFlight a little while ago regarding the suspended pendulum, which may also worth a look.