How To Get Into Cars: Land Speed Racing 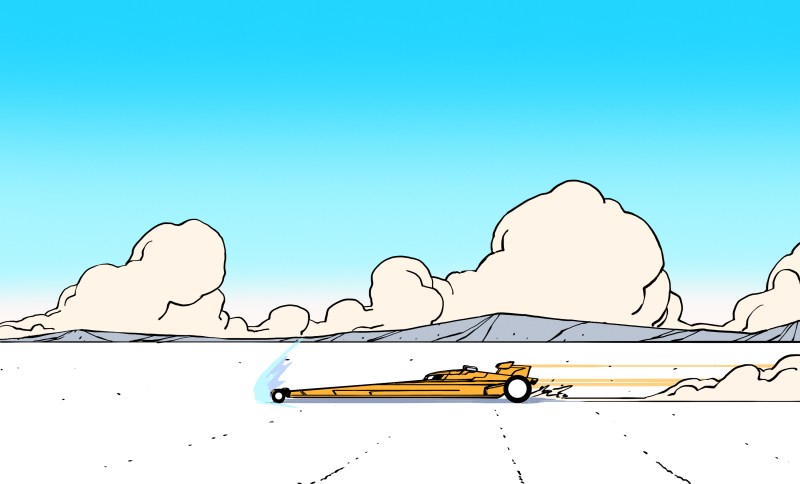 Land speed racing is one of the oldest forms of motorsport, and quite literally consists of going very, very fast in (ideally) a straight line. The higher the speed your car can attain, the better! It’s about the pure pursuit of top speed above all else, and building a car to compete is a calling for a dedicated few. If you’d like to join them, here’s how to go about it.

While taking the outright land speed record typically requires a jet-engined sled of singular design, there is plenty of land speed competition to be had in various classes for competitors fielding their own entries. There are vintage classes for older technology engines, still popular from the dawn of hotrodding, like Ford Flathead V8s and other contemporary motors. There are also classes split by engine displacement, number of cylinders, aerodynamic modifications, or the type of fuel used.

Racers often pick a record or set of records they wish to beat – for example, wanting to set the the fastest speed for a gasoline-powered, naturally-aspirated four cylinder – and build their car to that end. Alternatively, a racer might build a car with a large V8 engine, for example, to compete in one class, and then disable several cylinders on a later run to try and snatch records in lower classes as well.

Events are often run on salt flats that have suitable space for cars to reach their top speed and still have a suitable runoff area, such as Bonneville’s famous Speed Week event. Tracks are usually on the order of five to eight miles long, with several miles used for slowing down at the end of a run. Competitors are usually timed over several mile-long sections to determine the speed figure for record purposes. Alternatively, smaller events are run on long runways or stretches of road, like the Texas Mile. In these events, competitors aim to maximise their top speed at the end of a mile from a standing start, with a suitable runoff area in which to slow down afterwards.

It goes without saying that if you want to increase your top speed, more power is a great way to go about it. As with any build, the options available are endless, constrained only by your budget and the class rules within which you wish to compete. If you’re looking to go the naturally aspirated route, you’ll likely start with intake and exhaust mods. From there, cams and heads are the natural progression, before you get into the realms of a fully built engine with high-compression internals and a rev limit as high as the moon. If you want to add bulk power without so much hassle, however, you might find that forced induction is more your speed. A supercharger is typically a much easier install, but turbos can be cheaper and easier if you’re aiming for big gains.

Land speed racing has also long been a hot bed for wilder ideas around performance. Without concerns about long-term reliability, cornering prowess, excess weight, or quick acceleration, all manner of oddball concepts that are impractical in other motorsports suddenly have some merit. Nitrous oxide is par for the course, being a cheap way to add serious power to a motor. But the sky is the limit – multiple-engine designs are common, and all manner of weird fuels are too. If you can build it, and have it hang together for a few miles of continuous wide-open-throttle, there’s likely a class for you to compete in.

Aerodynamics is key to success in land speed racing. However, unlike track disciplines, which focus heavily on downforce, land speed racing is concerned most of all with drag. After all, assuming a vehicle is not limited by gearing, top speed is reached when the propulsive force generated by the engine is equal to the forces trying to slow the car down – like rolling resistance and of course, aerodynamic drag.

At highway speeds and above, aerodynamic drag dominates these forces. Thus, reducing aerodynamic drag increases top speed, and often significantly. The power needed to overcome drag is proportional to the cube of speed, so for double the speed, eight times as much power is needed. Thus, small reductions in drag can have major benefits.

At the mild level for competitors with street cars, taping up panel gaps and blocking out parts of a car’s radiator can help reduce drag by a few percent – useful if you’re close to breaking a record but haven’t quite got there yet. Other simple mods involve changing ride height to reduce the car’s profile, and adding rake – a slope front-to-rear – can help and also add stability at higher speeds. Pulling off extraneous protrusions like side mirrors and indicators can help, too.

Further modifications involve custom bodywork, often homebrewed in wood, fiberglass, or metal, to smooth the car’s lines and reduce that drag coefficient ever lower to make the most out of every available horsepower on tap. Custom bonnets, cowlings and boattails can all make a difference and help clinch a record. Even if such additions are heavy and cumbersome, weight only really matters for acceleration, not final speed. For land speed courses that are many miles long, slower acceleration isn’t a problem – so the gains to top speed are all that matters.

At the extreme end, the pursuit of lower drag ends up with custom built streamliners. Some of the most well known are the belly-tank racers, built out of ex-military drop tanks from World War II aircraft in the mid-20th century. These had the benefit of already being designed for minimum drag, and were cut up and fitted with engines and drivetrains to compete out on the salt. However, many different designs exist, with their constructions spanning everything from home-built tube framed racers to heavily-sponsored all-composite designs. In these builds, drivers often lay supine or prone to minimise frontal area, while streamlined bodywork helps minimise the coefficient of drag as well. Building one of these machines is no mean feat, but a challenge relished by the dedicated competitors of the land speed set.

The top gear you need at speed might stall out your motor if you’re starting from a dead stop. Thus many competitors at the higher levels also bring a pickup truck outfitted with tyres or rubber bumpers on the front. This is known as a push truck, and they’re used to literally push the land speed vehicle up to speed at the start of a run to get them going.  It’s unlikely you’ll need one when you’re starting out, but it’s something to consider down the road if you’re undertaking an advanced streamliner build with exceptionally long gears.

It goes without saying, but safety is a big deal in land speed racing, as it is in all motorsports. However, land speed events pose unique challenges. Often run in far-flung locations, medical facilities can be a long ride away, and the high speeds involved mean that even a minor mechanical failure can turn to disaster in the blink of an eye. Thus, the organisations that run such events take safety very seriously.

Lower-tier street car classes may only require minor levels of personal protective gear, such as race suits and helmets, depending on the venue and organisation. However, those competing at higher speeds may require a more advanced setup like HANS devices, harnesses, and roll cages. Active safety gear, such as fire extinguishers or even automatic suppression systems, are common requirements. Parachutes may even be required, to help slow cars safely rather than relying solely on brakes. It pays to follow the safety regulations to the letter, both so one can live on to contest future events, and to avoid the disappointment of not competing due to failing scrutineering. The volunteers who run these safety checks are to be respected – they’re looking out for everyone at the end of the day!

Land speed racing is one of the purest motorsport pursuits out there, focusing on maximising just one number above all others. Diehard adherents have an almost religious fervor, heading out to the hallowed salt to worship at the altar of speed. It’s worth making a trip as a spectator just to see what all the fuss is about – and you may just find yourself with a new addiction!