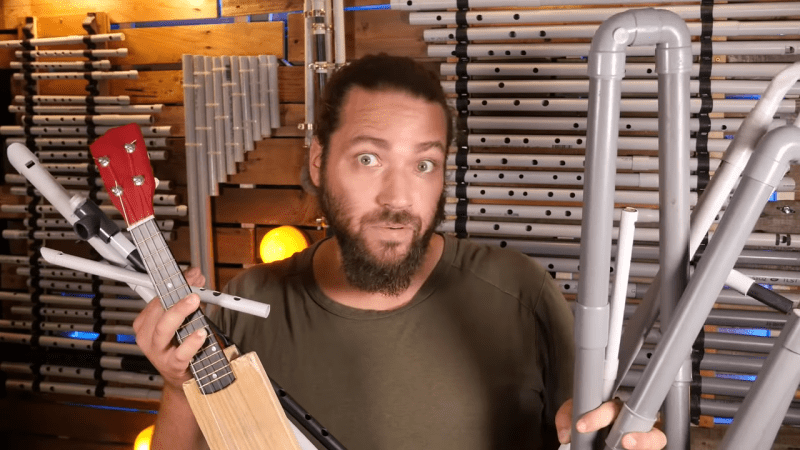 Most of the horror stories you hear about air travel seem to center around luggage. Airlines do an admirable job of getting people safely to their destinations, but checked baggage is a bit of a crapshoot — it could be there when you land, it could end up taking the scenic route, or it could just plain disappear. That’s bad enough when it contains your clothes, but when it contains your livelihood? Talk about stress!

This was the position musician [Nicolas Bras] found himself in after a recent trip. [Nicolas] was heading for a gig, but thanks to Brussels Airlines, his collection of musical instruments went somewhere else. There was nothing he could do to salvage that evening’s gig, but he needed to think about later engagements. Thankfully, [Nicolas] specializes in DIY musical instruments, made mostly with PVC tubes and salvaged parts from commercial instruments, so the solution to his problem was completely in his hands.

Fair warning to musical instrument aficionados — harvest the neck from a broken ukelele is pretty gruesome stuff. Attached to a piece of pallet wood and equipped with piezo pickups, the neck became part of a bizarre yet fascinating hybrid string instrument. A selection of improvised wind instruments came next, made from PVC pipes and sounding equally amazing; we especially liked the bass chromojara, sort of a flute with a didgeridoo sound to it. The bicycle pump beatbox was genius too, and really showed that music is less about the fanciness of your gear and more about the desire — and talent — to make it with whatever comes to hand.

Here’s hoping that [Nicolas] is eventually reunited with his gear, but hats off to him in the meantime for hacking up replacements. And if he looks familiar, that’s because we’ve seen some of his work before, like his sympathetic nail violin and “Popcorn” played on PVC pipes.