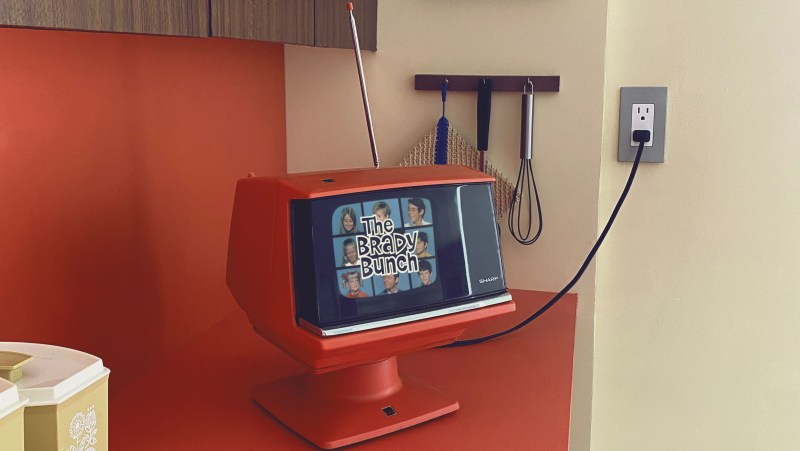 Here’s the story of an old Sharp TV, which was donated to [mandy] to be hacked. Just one look and you can see, very clearly, it plays old Brady Bunch tracks.

Upon inspection of the old television, [Aaron] and [mandy] found that the unit first hit the local Montgomery Ward in 1969. And what just momentous event played on televisions across North America in 1969? Well yes, the Apollo moon landing. And David Bowie’s Space Oddity. And Abbey Road. And Woodstock. But no, we’re talking about that other momentous event that would shape young minds for generations to come:

The pilot episode of The Brady Bunch.

Yes, The Brady Bunch, that campy TV show that first aired in 1969 and ended in 1974. It just so happens that [mandy]’s favorite TV show is The Brady Bunch, so when the bright orange Sharp TV came along, she knew what had to be done.

While the style of the television may be timeless, the internals weren’t. They were removed, and a new internal frame was built from a naturally occurring cellulose/lignin composite adorned in Brady Blue. Inspired by in-store advertising displays and billboards that play the same content on a loop, [mandy] and [Aaron] added an Eyoyo 7” monitor and an Aptek video player.

Leaving no question as to what era the TV came from, the revamped piece now plays about 50 of [mandy]’s favorite Brady clips on loop, all modified to be centered properly on the off-center screen. Groovy! To round out the experience and keep things mellow, the knobs were re-attached using Lego pieces, and are reportedly very satisfying to spin.

If you’ve got a thing for vintage hacks, you might like this Pi-powered NuTone home intercom or this vintage camera flash turned clock. And if you have any awesome hacks you think we’d like to see, be sure to send them on over to the Tip Line!