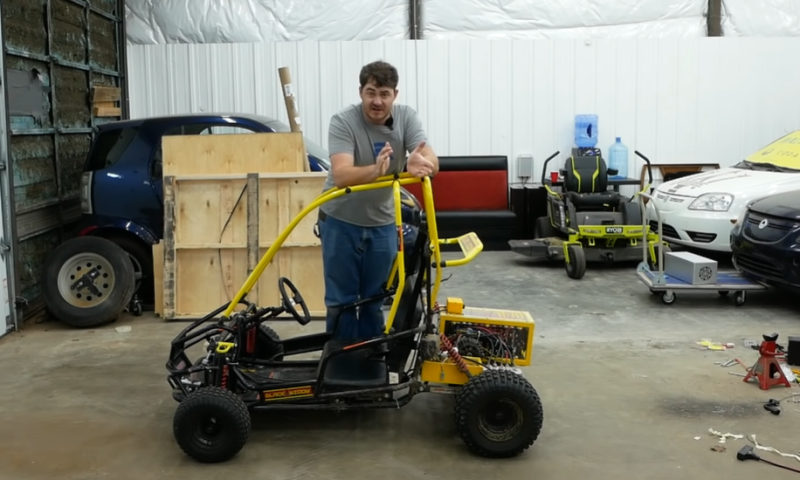 What do you give a six-year-old who loves going fast but doesn’t like loud noises? Convert a gas go-kart to electric of course! (Video, embedded below.) That goal started [Robert Dunn] of Aging Wheels down a long path toward a go-kart that almost, but doesn’t quite… work.

If you’ve watched any of [Robert’s] videos, you know he doesn’t take the easy path. The man owns a Trabant and Reliant Robin after all. Rather than buy a battery pack, he built his own 5S24P pack from individual LiFePO4 cells. Those cells generally are spot welded, so [Robert] built an Arduino-controlled heirloom-quality spot welder. Now while the welder could handle thin nickel strips, it wasn’t up the task of welding high current nickel-plated copper. When attempts at a solution failed, [Robert] built a system of clamped copper bus bars to handle the high current connections for the batteries.

If batteries weren’t hard enough, [Robert] also decided he wasn’t going to use an off-the-shelf motor for this project. He converted a car alternator to operate as a brushless motor. We’ve covered projects using this sort of conversion before. Our own [Jenny List] even wrote a tutorial on it. [Robert] unfortunately has had no end of trouble with his build.

In the first video, [Robert] works with a common no-name motor controller and tries to run the motor sensorless. Like others before him, he found that the motor would run great on the bench, but wouldn’t start under load. Give the go-kart a rolling start, and it would run. This is a common with sensorless motors — the motor controller uses unpowered coils as sensors, and can sometimes have trouble starting a motor in low speed/high torque situations. The solution is to add hall effect sensors to the motor. [Robert] did all that, tested all the 36 combinations of hall effect and coil wiring, and it STILL didn’t work.

Fast forward to [Robert’s] second video on this project. He switched over to a better-documented motor controller, built a great-looking battery box (twice), and put everything back together. The motor worked great on the bench and would start just fine. But any time the kart hit half throttle, the motor controller would cut out with a “hall sensor error”.

It seems like [Robert] built his motor correctly – the hall sensors are mounted in the middle of the coils much like [austiwawa] discovered in his e-bike build. While not shown in the YouTube video, [Robert] even tried isolating and shielding his hall wires, but nothing changed. At this point, [Robert] is taking a step back from the project for a few weeks, or at least until his six-year-old convinces him to fix it.

We have to hand it to [Robert] for not only posting his successes, but also his failures. The go-kart and spot welder are both examples of great workmanship. We’re sure with a bit more tinkering he’ll get his alternator-converted motor to work.  Have an idea what the problem is? Let us know in the comments!