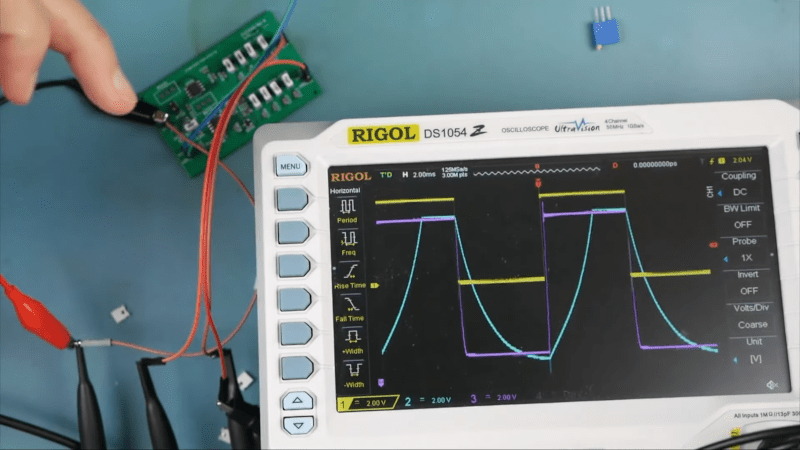 Op amps are generally pretty easy to apply, but there are some practical nonideal behaviors you have to keep in mind. [EEforEveryone] takes a test board with some 2X amplifiers on it and — after some fiddling around with the scope probes — demonstrates the effect of capacitive loading on the output of an op amp.

The op amp in question is the OP07. In fact, there are two identical opamps looking at the single input. The output of one op amp feeds directly to the scope probes. The second one passes through a bipolar transistor buffer consisting of an NPN and PNP transistor. Both outputs have optional capacitors that can be jumpered in or out of the circuit.

With no capacitance, everything works as you’d expect. The signal goes in and both outputs produce a perfect replica at twice the amplitude. Adding capacitive loading distorts the output signal and, as you might expect, the more capacitance on the output, the worse the distortion. The buffer does help, but there is still distortion.

The narrator mentions he probably should have used a worse op amp to accentuate the problems with trying to drive high capacitive loads, including instability. But even with the high-performance op amp, you can see that adding the buffer is definitely desirable. There’s no free lunch, though, as you do lose some output voltage range with the buffer in place. In the end, you can see an example of trimming the op amp, as well.

If you prefer to do your experiments virtually, you can do that. If you do, don’t forget to try all the simulations.