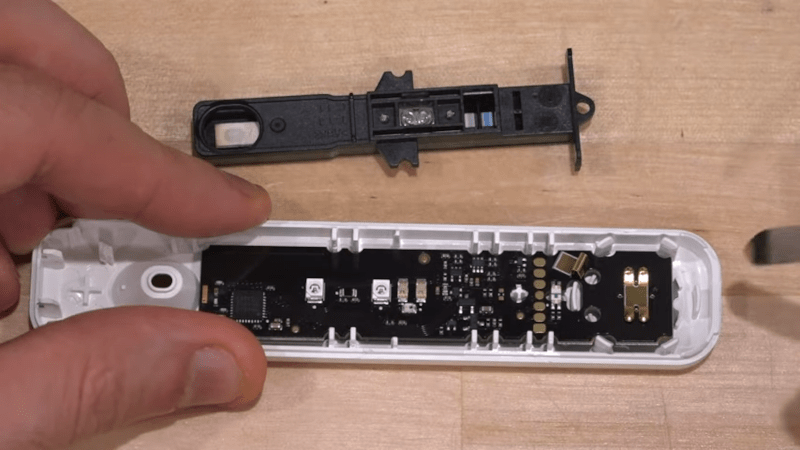 The latest video from [TheSignalPath] is a result of his purchase of a home COVID-19 test. He found an electronic version that connects to your cell phone and displays the results on the phone. The device is an antigen test and, internally, works like the home tests that show the results using lines similar to a pregnancy test. So, somehow, the phone version reads the lines and communicates with the phone. But how? That’s the point of the video, which you can see below.

In a traditional test, there’s a control line that has to appear to show that the test was done correctly. Then a line under that indicates detection of the virus. The circuit board inside the electronic test has a plastic unit onboard that contains a similar strip and has optical sensors for both the reference line and the detection line. Since it is essentially an optical device — there are some lenses in the strip assembly that look like they are detecting the dye as it moves through the strip with LEDs onboard to shed light on the situation.

Under the microscope, the CPU is a typical Bluetooth-capable ARM chip from Nordic. The board did power up, but the device is made to only operate once because of the test strip. The video notes — and we agree — it seems wasteful to create an entire Bluetooth-enabled microcontroller board with optical components just to read a strip one time that is pretty easy to read to start with. We’ll stick with the simple test strip. Still, it is interesting to see the insides.

If you want to read more about antigen tests, we covered that. We also talked about PCR testing.