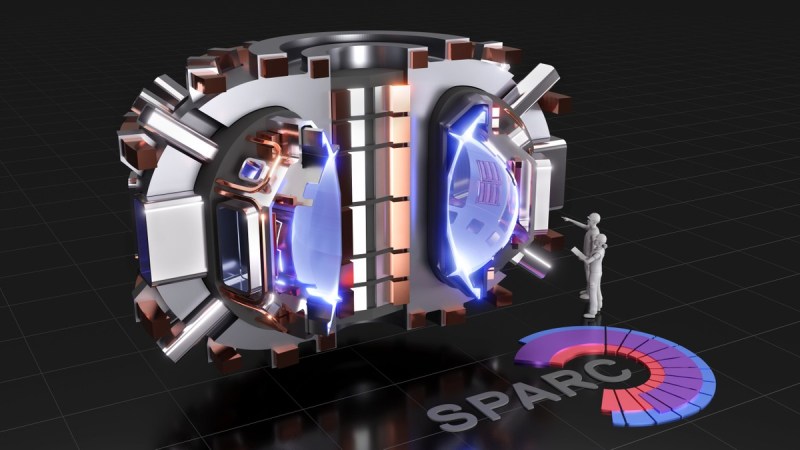 After decades of nuclear fusion power being always ten years away, suddenly we are looking at a handful of endeavours striving to be the first to Q > 1, the moment when a nuclear fusion reactor will produce more power than is required to drive the fusion process in the first place. At this point the Joint European Torus (JET) reactor holds the world record with a Q of 0.67.

At the same time, a large international group is busily constructing the massive ITER tokamak test reactor in France, although it won’t begin fusion experiments until the mid-2030s. The idea is that ITER will provide the data required to construct the first DEMO reactors that might see viable commercial fusion as early as the 2040s, optimistically.

And then there’s Commonwealth Fusion Systems (CFS), a fusion energy startup.  Where CFS differs is that they don’t seek to go big, but instead try to make a tokamak system that’s affordable, compact and robust. With their recent demonstration of a 20 Tesla (T) high-temperature superconducting (HTS) rare-earth barium copper oxide (ReBCO) magnet field coil, they made a big leap towards their demonstration reactor: SPARC.

A Story of Tokamaks

CFS didn’t appear out of nowhere. Their roots lie in the nuclear fusion research performed since the 1960s at MIT, when a scientist called Bruno Coppi was working on the Alcator A (Alto Campo Toro being Italian for High Field Torus) tokamak, which saw first plasma in 1972. After a brief period with a B-revision of Alcator, the Alcator C was constructed with a big power supply upgrade.

Based on the research findings, an improved Alcator DCT with superconducting field coils was proposed, but never saw the light of day due to the budget crunch for fusion research in the 1980s. Instead Alcator C was modified (hence C-Mod) as a compromise solution. Alcator C-Mod would continue to be used for fusion research at MIT’s Plasma Science and Fusion Center (PSFC) until it was shutd own in 2016.

CFS is a spin-off of MIT’s PSFC, which seeks to combine decades worth of data and lessons learned from the Alcator tokamaks with brand-new ideas and brand-new materials. Much of their business plan is contained in a paper published in 2015 in Fusion Engineering And Design, by B.N. Sorbom et al. (ArXiv preprint) titled ARC: A compact, high-field, fusion nuclear science facility and demonstration power plant with demountable magnets.

Here ARC stands for both Affordable, Robust and Compact, as well as being a nod to Howard Stark’s Arc reactor in the fictional Iron Man universe.

High-Tech and Easy to Assemble

What makes the ARC reactor and the prototype SPARC reactor so fascinating compared to other tokamaks is its highly modular nature, while adding design elements that are not found in other tokamaks. The major design element that was demonstrated with the 20 T HTS magnet this month is fascinating not just because of its immense field strength for its size and power input, but also in that it can be easily disassembled.

The entire ARC reactor is built around the premise of a core vacuum vessel in which the fusion reactions take place, with this vacuum vessel surrounded by a FLiBe (Fluorine Lithium Beryllium) liquid blanket that provides neutron moderation, shielding and cooling functionality, as well as breeding the tritium that forms part of the deuterium-tritium fuel which powers the reactor.

Surrounding the vacuum vessel and containment for the FLiBe liquid are the ReBCO HTS magnets in a characteristic D-shape that was experimentally determined via the Alcator tokamaks. Yet rather than being singular magnets, they can open, to allow for the inner assembly including the vacuum vessel to be easily swapped for maintenance and for trying out different test configurations.

As also noted in the 2015 paper by B. N. Sorbom et al., these magnets are the only major risk in the entire design, in the sense that nobody had before used YBCO (yttrium barium copper oxide) HTS materials for electromagnets like this. What the recent demonstration shows, however, is that CFS now seems to have tackled this problem.

Through the use of these ReBCO-based magnets, a SPARC reactor should be able to generate immensely strong fields with very little power input. This is key to ARC’s success as the model for a potential commercial reactor and bodes well for the SPARC reactor.

Another major benefit is that the use of HTS magnets means that SPARC won’t be need the exotic and expensive cryogenic helium that cools ITER’s magnets, but can use much cheaper liquid nitrogen instead.

Commonwealth Fusion Systems has laid out a roadmap on its website detailing which milestones are still left to be tackled. Step one was to get the basics together using the Alcator C-Mod, as noted earlier in this article. Step two was to sort out the HTS magnets, which now appears to have been checked off the list as well. This then takes us to step three, which is the construction of a SPARC reactor.

The fourth and final step is the construction of an ARC reactor, which is labelled by CFS as the commercialization stage. What this essentially means is that with the magnet stage tackled, CFS can now move on to proving that the ARC concept works.

According to the CFS website, a site has been selected for the construction of SPARC and construction is underway. The subsequent events would be first plasma and net electricity generation, with a predicted Q > 2, much of which would depend on any potential issues found during construction and the initial testing.

An obvious item that was not covered in the original 2015 paper, and which has not since been covered in great detail to this writer’s knowledge are the divertors in SPARC (and subsequently ARC). These are devices that allow for impurities to be removed from the plasma while the reactor is active. They are essential for sustained operation of a fusion reactor.

As divertors are the region where the plasma comes closest to the wall, so these have to be cooled.  In the case of ARC and SPARC, this would have to be done using the FLiBe fluid. A major research and development question with SPARC is likely to be the exact configuration and operation of these divertors. Naturally, since rapid swapping of the vacuum vessel and surrounding structures is a feature of SPARC, it should be possible to work through a wide number of configurations in little time.

With the ARC reactor it is hoped to create a fusion reactor with a radius of 3.3 m that can achieve a Q of > 13, with a 270 MW electrical output. This compares to a major radius of 6.2 m for ITER with an on-axis magnetic field of 5.3 T, where ARC would have an on-axis magnetic field of 9.2 T. The exciting prospect with ARC is thus essentially that of achieving a similar thermal and electrical output in a much smaller reactor.

As with all such projects it’s hard to tell for sure what will work out, as demonstrated last century with the Z-pinch fusion reactors that seemed to be mere years away from commercialization in the 1950s. Even so, our knowledge of plasma physics and related fields has increased significantly since those early days. Whether ARC, another tokamak design, or perhaps a stellarator derived from the Wendelstein project will be the first to show the way to economically viable commercial nuclear fusion is still up in the air.

One thing that is however quite clear, and that is that the old adage about fusion power always being a decade away is at severe risk of being shelved for good within the coming years.