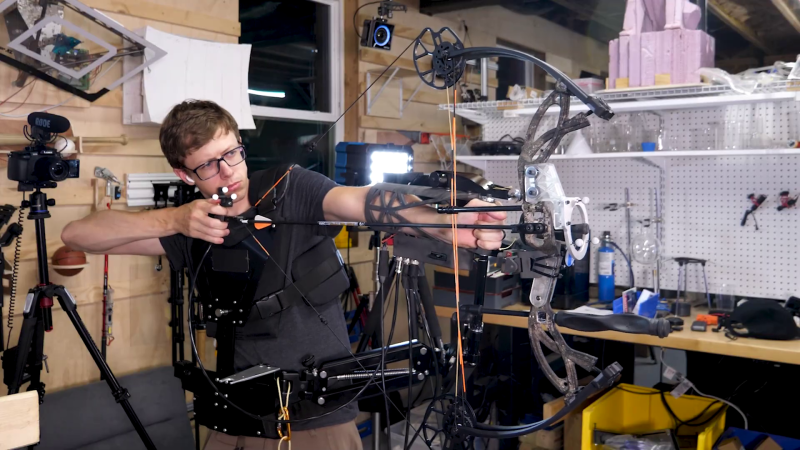 According to legend, King Edward III once said: “If you want to train a longbowman, start with his grandfather.” Consistently making accurate hits with any bow, especially on moving targets, takes many hours of practice. Or, if you’re [Shane Wighton], you can spend a comparable amount of time building, debugging, and rebuilding an robotically-enhanced bow to do it.

The goal was to shoot flying targets out of the air, so [Shane] had to create a system that could track the position of the bow and the target, and automatically adjust the position of the bow and loose the arrow at exactly the right moment to intercept the target. The position tracking was done with the same Optitrack cameras [Shane] used on his robotic basketball hoop, with reflective marking balls on the bow, target, and the release mechanism. The auto-aiming is done with a two-axis rack and pinion mechanism driven by a pair of stepper motors. [Shane] first used the cheapest recurve bow he could find online, which caused accuracy issues likely related to the Archer’s paradox. The setup also made him repeatedly hit himself in the face, because the servo-operated release mechanism would release unexpectedly without having a proper anchor with his draw hand.

[Shane] eventually upgraded to a compound bow, which reduced the tension he had to hold while lining up the shot, but also increased the weight of the system dramatically. This leads him to fully embrace the mech suit look, and use a Steadicam vest to hold the weight of the bow. This finally allowed him to reliably William Tell shots and hit the flying targets.

Whether it’s an all-in-one electronic golf club, an explosive baseball bat, or a robotic pool cue, [Shane] is certainly adept at using impressive engineering skills to compensate for his lack of physical skill, or just his willfully closed eyes.