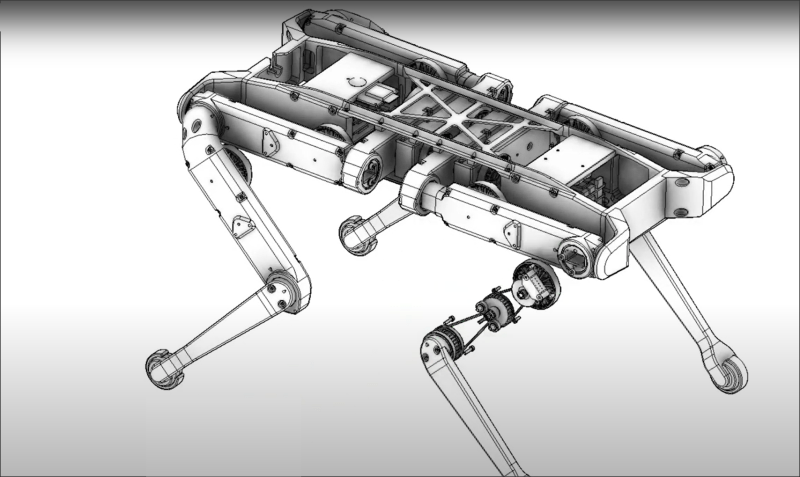 The Open Dynamic Robot Initiative Group is a collaboration between five robotics-orientated research groups, based in three countries, with the aim to build an Open Source robotics platform based around the torque-control method. Leveraging 3D printing, a few custom PCBs, and off-the-shelf parts, there is a low-barrier to entry and much lower cost compared to similar robots.

The eagle-eyed will note that this is only a development platform, and all of the higher level control is off-machine, hosted by a separate PC. What’s interesting here, is just how low-level the robot actually is. The motion hardware is purely a few BLDC motors driven by field-orientated control (FOC) driver units, a wireless controller and some batteries. The FOC method enables very efficient motor commutation, giving excellent efficiency and maximum torque.  A delve into the maths of how this method operates will be an eye opener for the uninitiated. Optical encoders attached to the motors give positional feedback for the control loop.

It is this control loop that’s kinda weird, in that operates over Wi-Fi! Normally one would do all the position, torque and speed sensing locally within the leg unit, with local control loops, as well as running all the limb kinematics and motion planning. This would need some considerable local processing grunt, which can make development more difficult.

This project side-steps this, by first leveraging the ESPNOW protocol, initially aimed at the ESP8266 and friends. By patching Ubuntu Linux, and enabling preemptive multitasking for real-time scheduling, as well as carefully selecting Wi-Fi drivers, it was possible to get raw packets out to robot in about 1 ms, enabling control loop bandwidths of around 1 Khz. And, that, was fast enough to run at least sixteen motors in parallel.

By pushing all the processing grunt to a fast PC, it is possible to get very creative with the kinematics, and develop new ideas much faster than the embedded approach, without worrying about running low on local CPU resource. You can see from the videos below, that the platform is already significantly advanced, capable of walking over uneven, and inconsistent surfaces, jumping vertically a meter, as well as recovering from shoves, slips and other external perturbations. The project YouTube has many more videos of the testing process to whet your appetite.

There are many repositories to explore on the project GitHub, which would be a great start for your next robot build, so if robots are your thing, this is definitely one to study up on. Maybe start with the research paper and get stuck into the discourse?

6 DOF Biped, “Bolt” being poked around: