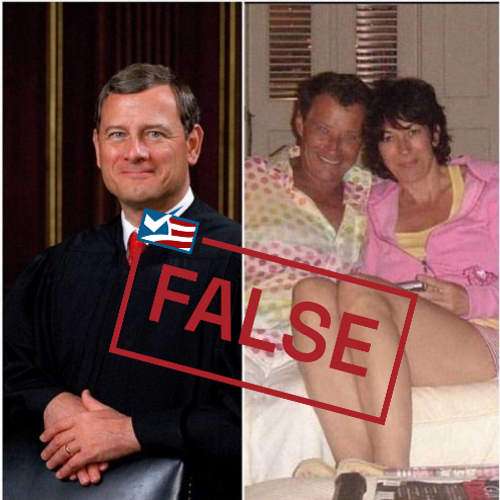 Ghislaine Maxwell, who is charged with assisting accused sex trafficker Jeffrey Epstein, is scheduled to go on trial on Nov. 29. Social media posts are circulating a photo that falsely claims to show Chief Justice John Roberts in an affectionate pose with Maxwell. The photo actually shows Maxwell with a French modeling agent facing sexual assault charges.

Maxwell is being held without bail ahead of her federal trial, which is set to begin Nov. 29 in New York City.

As we’ve reported, social media posts have falsely tied Epstein and Maxwell to various political leaders and celebrities, including Bill Gates, Chris Wallace and the wife of Dr. Anthony Fauci. 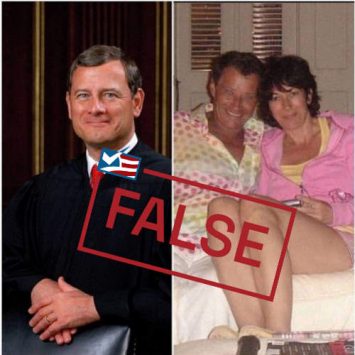 In the latest bogus claim, posts circulating on social media purports to show Maxwell in an affectionate pose with John Roberts, the chief justice of the U.S. Supreme Court.

A post on Twitter shows the same photo of Maxwell with an unidentified man with the caption, “Justice Roberts. What a lovely photo. #JusticeRobertsIsCompromised”

But Roberts isn’t the man pictured with Maxwell, nor does the image show that he was linked to Maxwell or Epstein.

The photo originated in an article on July 3, 2020, on the French news website 20 minutes. The caption on the photo reads: “French agent Jean-Luc Brunel and Ghislaine Maxwell on Jeffrey Epstein’s island in the mid-2000s. – Photos provided to ‘20 Minutes.’”

Brunel was a French modeling agent who was arrested by French authorities in December 2020 as part of the investigation into Epstein. Virginia Giuffre, one of Epstein’s and Maxwell’s accusers, said in a court filing that Brunel would offer modeling work to young girls, then take them to the U.S. so he could “farm them out to his friends, especially Epstein,” Reuters reported. Brunel was imprisoned in Paris on charges of multiple attacks on Giuffre and another woman, The U.S. Sun reported on Sept. 16.

According to Newsweek, the claim that Roberts was linked to Maxwell or Epstein began after then-President Donald Trump and QAnon-supporting attorney Lin Wood “posted a series of tweets attacking Chief Justice John Roberts in the wake of the Supreme Court’s decision to throw out yet another bid to overturn the election results.”

Maxwell is reportedly under close watch by guards, in light of Epstein’s death by suicide while in federal custody in 2019. On Nov. 22, Maxwell’s family appealed to the United Nations for help to get her released on bail.

Editor’s note: FactCheck.org is one of several organizations working with Facebook to debunk misinformation shared on social media. Our previous stories can be found here.

Li, David K. “Ghislaine Maxwell’s family appeals to United Nations for help getting her out on bail.” NBC News. 23 Nov 2021.