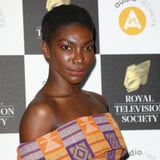 On April 29, actor and director Noel Clarke was suspended from BAFTA following allegations of sexual harassment. As reported by The Guardian, 20 women, “all of whom knew Clarke in a professional capacity,” have spoken with the publication about allegations of “sexual harassment, unwanted touching or groping, sexually inappropriate behaviour and comments on set, professional misconduct, taking and sharing sexually explicit pictures and videos without consent, and bullying between 2004 and 2019.”

Following the release of the article, I May Destroy You creator and actor Michaela Coel shared it on Twitter and posted a statement in solidarity of the 20 women who have come forward. “I am here to offer great support for the 20 brave women who have come forward; those who have shared their identities with us, but also those who have preferred to use an alias; the mental hurdles a black woman must overcome to do such a thing as reveal their identity within a narrative of rape abuse or bullying at the hands of someone within our own community can sometimes be too much,” she began.

“Speaking out about these incidents takes a lot of strength because some call them ‘grey areas’. They are however far from grey. These behaviours are unprofessional, violent and can destroy a person’s perception of themselves, their place in the world and their career irreparably. I have shared to show solidarity, to express my belief in them and to stand with them in their indignation.”

Michaela’s statement of support closed: “I applaud the Guardian and its journalists for investigating and publishing this story.”

Since The Guardian‘s story was published, Sky has halted Noel’s involvement in “any future productions.”