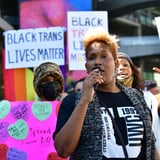 It’s been three weeks since Dave Chappelle sent social media into a firestorm with the release of his latest Netflix project, The Closer. The one-hour special seemed to focus on members of the LGBTQ+ community, particularly trans women, making them the punchline of several of his jokes. However, for members of the LGBTQ+ community, the comedian’s latest special isn’t all “jokes” and can be dangerous.

At one point in the hour-long stand-up, Chappelle even went out of his way to refer to himself as “Team TERF” in defense of Harry Potter author J.K. Rowling. In 2019, the author announced herself as a TERF via Twitter, an acronym for a trans-exclusionary radical feminist.

He continued, “I didn’t even know what the fuck that was, but I know that trans people make up words to win arguments…” Chappelle even implied that “They” were out to get him. “They” is a dig at people and their respective gender pronouns. The comedian replied, “One ‘they’ or many ‘theys’?”

To transgender and nonbinary viewers, the special is nothing more than a dismissal of their identity and could lead to actual harm. POPSUGAR spoke to prominent LGBTQ+ voices about Chappelle‘s new special and how platforms like Netflix need to be more careful with content.

According to Konrad Juengling, an LGBTQ+ activist and writer, Chappelle’s comments about trans people only add to the narrative that someone’s very existence is cause for ridicule.”LGBT people already face harsh stigma and bigotry in their everyday lives, he wrote via email. “They shouldn’t also be a cheap punchline for a comedian who can’t come up with better material.”

Juengling believes Chappelle’s war on freedom of speech translates to the comedian and others wanting freedom from consequence. Juengling continues that impunity should not be an option in this case. “Those words are damaging and contribute toward a culture of violence that LGBTQ people regularly face at disproportionately high rates,” he wrote.

Like Juengling, Hope Giselle, author and trans activist, says that there is no “war on cancel culture” and that queer and trans people are only asking for their boundaries to be respected. She asks,”If you can’t do your craft within those boundaries, are you truly the GOAT or just somebody who likes to take the easy way out and profit off of low-hanging fruit?” While she did watch the special twice, she couldn’t find the humor in it. “No matter which scope I came at it from, because of my moral compass, something didn’t sit right about any of the jokes.”

Giselle also noted that despite the special’s plethora of issues-violence toward women, queer or not, and the defeminization of Black women-some viewers have seemed to hold onto his “jokes” about the LGBTQ+ community as a dissertation of gender and sexuality.

With nearly 1.2 million people self-identifying as Black and LGBTQ+ in the U.S., according to a 2021 study, erasure has been a huge problem. Acts of violence against Black trans women also continue to increase. According to data from the Human Rights Campaign, at least 41 transgender or gender non-conforming people were fatally shot or killed by other violent means.”

“Queer people have to stop being the butt of selling tickets,” TS Madison, entertainment personality and LGBTQ+ activist, told POPSUGAR via phone. She said Chappelle influences others, and with that comes great responsibility. Madison also agrees that while the Black community is sensitive to racism, it may be hard for some to grasp the Black queer experience.

“If we can understand [racism] and say there has to be some type of limit of the kind of jokes that we tell, why can’t we look at a perspective of trans or LGBT people,” Madison said.

“At PFLAG, we know inclusion is an ongoing, lifelong journey. Part of that means organizations must sincerely listen to those affected in decision-making and take responsibility when their intent and impact don’t align. There are ways for all of us to do better,” Brian K. Bond, the organization’s executive director, said in a recent statement.

Several Netflix employees also shared their frustrations but weren’t met with much support from the company. Three employees were suspended and subsequently reinstated, while one-B. Pagels-Minor, a trans employee-was fired, according to a report by The Verge. In response to the backlash, more than 60 demonstrators, in an effort led by Pagels-Major, gathered outside of the Netflix headquarters in Los Angeles on Oct. 20. In a list of demands released by organizers, employees asked for investment in trans and nonbinary talent and content creation, workplace protections for trans employees, and harm reduction on the platform with regard to transphobic content.

In his latest comments on the controversy, Netflix CEO Teo Sarandos declined to place a trigger warning on The Closer, and noted that “the inclusion of the special on Netflix is consistent with our comedy offering, it’s consistent with Dave Chappelle’s comedy brand and this is … one of those times when there’s something on Netflix that you’re not going to like.”

Madison, Giselle, and other members of the LGBTQ+ community aren’t calling for Chappelle to be canceled, but they do think it’s far past time he takes accountability for his words.

Madison shares, “If you need to be reprimanded, and you need to lose a check, and a gig, or a job, so you can understand that you can’t roll free in this new time that’s going on and use that same vitriol and malicious intent that you were using in a time before, then so be it.”