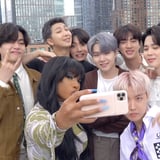 A month after collaborating on a catchy remix, Megan Thee Stallion and BTS shared quite the heartwarming reunion. The boy band just released a video blog documenting their first time meeting the rapper in New York City in September. Highlights from the six-minute video include the capturing of some iconic selfies, BTS teaching Megan hand choreography, and the group getting quality time with Megan’s french bulldog, 4oe.

In one especially sweet moment, Megan described how she reacted when BTS first approached her about the remix. She said, “I was so grateful. I had already told my managers, ‘I want to do a song with BTS.’ And when it came up, I was like, ‘They know me?'” RM replied, “Everybody knows you.” Megan also floated the idea of another collaboration, complete with a music video. “We gotta do it big,” she said. “It’s going to be epic.”