Live from New York. It’s Saturday night! If you’ve never missed an episode of SNL, you may want to know how to watch Saturday Night Live online for free to see Kim Kardashian, Rami Malek and more celebrities as guests this season.

Saturday Night Live—or better known as SNL—premiered in October 1975 as a late-night live television sketch comedy an variety show. The series, which was created by Lorne Michaels, invites a celebrity guest each week, who delivers an opening monologue an performs in sketches—which often parody contemporary culture or politics—with a regular cast. The show, which also features performances each week by a musical guest—traditionally begins with a cold open sketch that ends with a cast member breaking character and proclaiming, “Live from New York, it’s Saturday Night!”

Since its premiere in 1975, Saturday Night Live has had hundreds of celebrity hosts, including Emma Stone, Dwayne Johnson, Robin Williams, Drew Barrymore, Michael Jordan and more. The show has also won 86 Primetime Emmy Awards and holds the record for the TV show with the most awards in Emmys history. So how can one watch Saturday Night Live online for free? Read on ahead for our tips and tricks.

When does Saturday Night Live 2021 air?

Who are the Saturday Night Live 2021 hosts?

See below for the list of the Saturday Night Live season 47 hosts announced so far.

Who are the Saturday Night Live 2021 musical guests?

See below for the list of the Saturday Night live season 47 musical guests announced so far.

Who are the Saturday Night Live 2021 cast members? 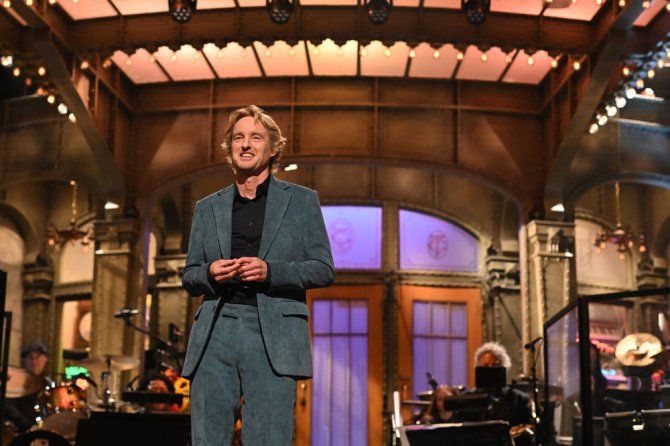 How to watch Saturday Night Live 2021 online for free

For those who want to watch Saturday Night Live online live, Sling is an excellent option. Though the service doesn’t have a free trial, Sling has a current deal that offers users one month for just $10. Sling offers two plans: Sling Blue and Sling Orange. (Sling Blue is more suited for news and entertainment, while Sling Orange is better for sports and family.) Both include the $10 first-month deal and cost $35 per month after the deal ends, if one chooses to subscribe. Both also offer 50 hours of DVR and channels like NBC, which is where Saturday Night Live airs. If you had to choose one, though, we recommend Sling Blue to watch Saturday Night Live. Not only does the plan include more channels, but it also allows the user to stream on three devices (Sling Orange allows only one), which means that you can split the cost with two other people, who can stream Saturday Night Live (or other TV shows) on their own devices. (That’s just $3.33 per person.)

If you’re a Verizon customer (or know someone who is), there is another free option. For a limited time, customers with unlimited plans, such as Get More Unlimited and Play More Unlimited, have access to Verizon’s complimentary The Disney Bundle, which includes Disney+, Hulu and ESPN. Disney+ and ESPN are nice, but Hulu is the real reward here to watch Saturday Night Live online for free.

So how do you claim your free Hulu subscription? Well, Verizon has a FAQ here that explains the steps a Verizon customer needs to take to access Disney+ for free, but here’s the gist: Go to My Verizon site or the My Verizon App. In the app, go to the Plans & Devices page and click Explore Adds. On the site, choose Account on the top menu and click Add Ons & Apps.

There, customers will be able to choose The Disney Bundle, which includes Disney+, Hulu and ESPN. After choosing the bundle, click Get It Now. Enter the email address you want to use for your subscriptions, check your email for confirmation and voila. You can now watch Saturday Night Live online for free. The deal ends soon, so it’s best to sign up now.

Peacock is anothe way to watch The Voice online for free. Though users can’t watch NBC live from the service, Peacock uploads episodes of The Voice the next day so fans can catch up. While Peacock offers a free subscription, unfortunately, viewers need to subscribe to one of Peacock’s paid plans to watch Saturday Night Live: Peacock Premium (with ads) for $4.99 per month or Peacock Premium Plus (with no ads) for $9.99 per month. As for what’s on Peacock, the service has more than 900 movies and 300 TV shows from NBC Universal’s properties including NBC, Bravo and E!.

Saturday Night Live airs Saturdays at 10 p.m. on NBC. Stream the next day on Hulu or Peacock.