Halloween Is the Gayest Holiday – and Everyone Is Finally Catching Up 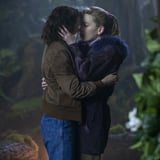 I was doing my typical TikTok scroll one day, and the sound of Jessica Lange‘s infamous voice saying, “That’s what gays do! Munch butts and celebrate Halloween,” came across my For Your page. No, she wasn’t portraying Constance from American Horror Story. Instead, that voice belonged to Lange’s character Dusty Jackson from The Politician. Even though Dusty isn’t known to speak truths about the “gays,” the latter part of her statement does ring true for a lot of people in the LGBTQ+ community. There are hundreds of videos using this sound; the top ones range from users saying “October is actually just Pride Pt. 2” and why they’ve been “Halloween hunting” so often.

The sound isn’t quite viral yet. Of course, it showed up on my FYP because I’m a lesbian who decorates her apartment for Halloween in September. But, for a lot of queer people, there’s definitely some accuracy to the notion that “Halloween is for the gays.”

Halloween and LGBTQ+ community history go way, way back. In fact, it’s known as “Gay Christmas” because of how popular it is for queer people. And the word “Christmas” is important, as it takes a holiday that might contain a lot of hurt for queer individuals and flips it. Halloween is based on pagan tradition and is one of the only major holidays without overt Christian tie-ins. With documentaries like Pray Away on Netflix showcasing the violent industry of conversion therapy in churches or Pope Francis’ comments about not blessing same-sex marriages in the Catholic Church because God “does not and cannot bless sin,” the odds of meeting a queer person with religious trauma are pretty high. A holiday with no connection to religion is very attractive; it makes sense to dub Halloween “the great gay holiday,” as lesbian poet and author Judy Grahn once called it.

Halloween is a night when those who feel shunned by society present however they want. They can dress in something that makes them feel empowered or sexy, and allow them to be carefree without judgment. Halloween Drag Balls and queer Halloween bashes make up more of the gay history surrounding Halloween, but that didn’t always translate into the greater narrative, nor did it contribute much representation to queer people in horror movies.

To quell perceived debauchery, Hollywood began to enforce what was known as the Hays Code in the 1930s. It consisted of many rules of self-censorship that writers and directors had to follow if they wanted their movies seen by the masses. Will H. Hays, who helped create this code, said it promoted “good taste and community value” in film. And of course, it included rules that had to do with “sexual perversions,” which heavily applied to homosexuality on-screen. While the code sort of evolved into the rating system we have today and isn’t as stringent when it comes to censorship, its impact on quelling same-sex relations in movies and TV is still felt today, especially concerning the demonized queer coding of villains.

Just like a lot of movies and TV did, horror implemented the use of the “Bury Your Gays” trope whenever there was a queer character on-screen. This trope is a harmful plot device that kills off queer characters in a majority-straight cast in a movie or TV show. Sexuality was often a reason behind the deaths and a major parallel to an outside world that already vilified homosexuality. Queer people weren’t just brutalized in real life – they weren’t able to live on screen either.

That’s where reading the queer subtext of a horror movie comes into play. You’ve got your gay icons like The Babadook – whose “defiant” act of terrorizing an Australian family instituted him as a queer meme – or the homoerotic relationship between Billy and Stu in Scream. Then there’s Lestat and Louis in Interview With a Vampire, who not only could be interpreted as gay if the viewer desired but also introduced a family unit made up of two men and a child. While Rebecca isn’t a regular blood-and-guts horror story, it’s a story of possession and ghosts nonetheless. Mrs. Danvers is another character often viewed through a queer lens; she was very obviously attached to the late Rebecca De Winters, and that obsession can be identified as queer-coded. We can also look at 1992’s Bram Stoker’s Dracula, a movie wrought with sexual tension, and not just between the women and men. Mina is pretty obviously more attracted to her best friend, Lucy, than her fiance. The two share a kiss when Mina tries to break Lucy out of Dracula’s spell.

A lot of horror movies can be seen as allegories for queerness as well. Look at the deeper implications of Frankenstein’s monster. He didn’t choose to be there, nor was he evil or monstrous from the start. The human cruelty surrounding him is what molded him into the terrifying being people know him as today. Frankenstein’s monster was despised by the very society that made him, which draws great parallels to queerness. Carrie is very much in this vein, too, highlighting a girl who’s put in a literal closet by her religious mother when she doesn’t “behave” (like when she gets her period). There’s an added layer to Carrie, of course, since she has strong powers. But the queer reading of Carrie is not that much of a stretch when you look at how she’s afraid of herself, villainized by her mother, and ostracized at school.

But it’s not all doom and gloom. The Rocky Horror Picture Show was one of the first “spooky” movies to come out that positively depicted expressions of gender non-conforming people. It was also camp, a term for exuberant, anti-mainstream creative otherness that became culturally synonymous with queer identity. And today, there is even more queer representation in horror. From the Fear Street trilogy’s Deena and Sam to a ton of characters on American Horror Story, queer horror fans and Halloween lovers can finally see themselves in this genre. The hauntingly beautiful The Haunting of Bly Manor leaned more into a chilling aesthetic than jump horror, but delivered one of the best queer romances in television with Dani and Jamie. With the couple spending 13 years together and Dani sacrificing herself for the betterment of others, she doesn’t fall into the “Bury Your Gays” trope. But it breaks our hearts nonetheless.

Halloween can be a time for tricks and treats, but for the LGBTQ+ community, it’s one of the best times to lean into that transformative energy. When this holiday comes around, “the most wonderful time of year” takes on a whole new meaning for the gays.