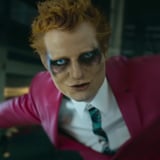 “I know what you are,” Bella Swan says when she first sees Edward Cullen sparkle in the midday sun like a disco ball that never goes out of style. Nearly 13 years later, the Cullens’ secret is out, and Ed Sheeran is here to remind us that sparkly vampires with questionable powers don’t have to be left behind in our Twilight days. Glammed up in a hot-pink suit and enough glittery eyeshadow to last a lifetime, Sheeran embraced his inner vampire in the music video for his new single, “Bad Habits,” and his undead dance moves are by far our favorite part of his new fang-wearing persona.

“My bad habits lead to late nights, endin’ alone / Conversations with a stranger I barely know,” Sheeran sings as he and his fellow “monsters” terrify groups of people walking through the subway station. A “bop,” according to Sheeran’s fans on Twitter, the catchy pop song is a decent rival to the “Shape of You” singer’s cover of “Tiny Dancer” with Courteney Cox and Elton John. But our favorite part of the video was definitely watching Sheeran fly into a sea of smiley face balloons just ’cause. Watch the full “Bad Habits” video here to get a closer look at Sheeran’s poison-green claw-like manicure, spiked 2001 hair, and new set of fangs.