Jenna Johnson can describe her time on Dancing With the Stars with one word: serendipitous. Johnson, 27, joined DWTS in 2014 as a troupe member for season 18 before she was promoted to a professional dancer five seasons later.

She was cast on the show after she was scouted by DWTS’ producers while she was a finalist on season 10 of So You Think Can Dance, which filmed across the hall from DWTS at CBS Studios. “As soon as I got off the tour with So You Think You Can Dance, I got a call from Dancing With the Stars that was like, ‘Would you want to join our show as a troupe member?’” Johnson tells STYLECASTER. “It was such a surreal moment.”

Johnson made history on DWTS in September when she and her partner, YouTube star JoJo Siwa, became the first same-sex pair to perform in the show’s 30 seasons. “I was asked, ‘Would you feel comfortable dancing with a female this season?’ I didn’t hesitate and I said, ‘Yes,’” Johnson says. “Then I got very nervous, and I was like, ‘Oh my goodness. What am I doing? Do I even know what I’m doing? Do I know how to handle this?’” 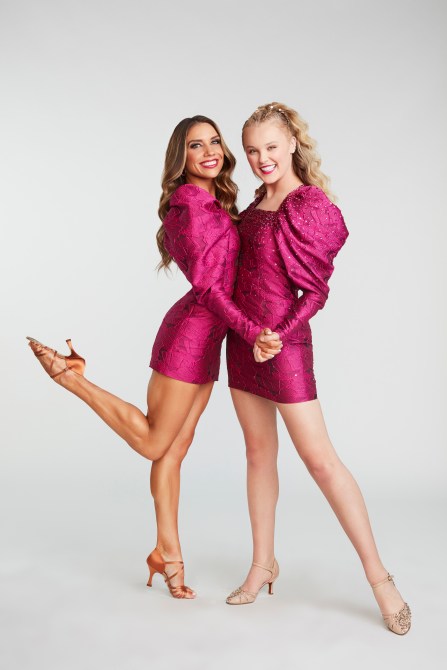 Those nerves, however, diminished when she met Siwa. “The second I met JoJo, all of those fears went away. She’s so sure of herself. She has no fear. She wants to do things that are scary and groundbreaking for others who will then follow in her footsteps,” Johnson says. Despite her initial nerves, Johnson can’t picture herself with any other partner this season. “If you were going to tell me this, even two years ago, I wouldn’t have believed you,” she says. “It shows how far we’ve come as a society. What a big step Dancing With the Stars took. Now, looking back, I can’t even imagine this season with a guy.”

Johnson’s time on DWTS has also afforded her the opportunity to collaborate with brands like Jo+Jax, which she released her first dancewear collection with earlier this year. “It was really important to me to do something very sexy. Something very feminine that made anyone wearing it feel bold, beautiful and fearless,” Johnson says of the collection, which includes leggings, crop tops and mesh bra tops. “My favorite piece is the cheetah fringe skirt. It’s the definition of me. A bit fitted and sleek, but super sassy and fierce.”

Ahead, Johnson talked to STYLECASTER about how she met her husband, Valentin Chmerkovskiy, on DWTS; her reaction to fans shipping Val and his partner, Olivia Jade; and the challenges she didn’t expect when it came to dancing with another woman.

On the first time she met Val

“Val and I both grew up in the competitive Latin world. He’s a few years older than me so we were in different categories when we were competing. There was one national competition in my hometown, and I saw him compete for the first time. He and his partner won the whole thing. I was like, ‘That couple is amazing. I’m obsessed.’ Funny enough, he stuck around and watched me compete at that same competition, and I ended up winning as well. Cut to seven or eight years later, I will never forget meeting him at my very first rehearsal on Dancing With the Stars. I was the only new person that season. I was so nervous. I was this little girl, so excited she was walking into her dream job. I walked in and I got partnered with him in one of the opening numbers. I knew it was a wrap. I mean, the butterflies, the way he spoke, the way he smelled, what he was saying to me. And dancing with him? I mean, I’m biased, but he is the best  male pro on Dancing With the Stars. That rehearsal started our whole dating, love story situation.”

On why she’s not competitive with Val at home

“We try to find a good balance of work life and home life because it’s an interesting experience working with your spouse. Everyone thinks we have this competitive nature about us, and we want to outdo each other. Obviously, we’re both competitive and we take our work seriously, but I love watching him dance, thrive and be successful on the show. Vice versa, he has been my number one fan. Especially to see him this season, I feel like he hasn’t been able to dance like this in a few seasons. You can just see him light up the floor every night he gets on there. I’ve been so attracted to him because it’s made me remember, ‘Oh yeah, that’s what he can do. That’s my man!’ I think both of us have a great shot of being in the finals together. There’s never been a married couple in the final four together. And I feel like this could be a really strong chance for both of us to be there. Obviously, I want to win that Mirrorball with JoJo, but if he were to bring it home with Olivia, it’s still coming and going to be hung in this cabinet, so what’s his is mine and what’s mine is his, and it’s for the fam!” “It’s not a new thing for me and Val because we’ve been on the show for many years, and we’ve experienced this many times. Both of us—with me, with him. I was proud of Olivia for speaking up so quickly. I’m sure it’s an uncomfortable situation for her. She’s had to deal with some nasty rumors over the years. She’s been strong and doesn’t say much, but I think she was so quick to respond because it involved other people. I was proud of her and very grateful because she’s so sweet and humble about this whole experience. Val and I are used to this. It’s not the first time, and it’s not going to be the last time. Because we both take our careers very seriously, we want to create a connection and an energy with our partners because that’s how you’re successful on the show. If you look at any of the partners who do well, they have a bond together. It’s not new for fans to create this sort of narrative. Obviously, it’s annoying at times and like, ‘Did we forget that Val and I are married?’ But that’s the nature of the internet. They love drama. Val and I were kind of giggling about it like, ‘This means we’re both doing our jobs very well.’ It’s a weird situation for new people walking into it, but that’s the nature of our business. You also have to look at actors who have intimate scenes with their co stars. We’re acting. We’re creating art. We’re telling stories. That’s our job.”

“We didn’t expect that both of us having long skirts would be an issue. That’s something that I don’t have to worry about dancing with a guy because they have pants on most of the time. Something so epic about ballroom dancing is the lifts. We’re two girls.She’s 18 and never had to lift anyone or anything before. So I’ve been like, ‘Can you catch me? Can we do this?’ It’s been hard trying to figure out how we can still have those wow moments that some of the other couples are doing. Little things like that have been a challenge.” On how JoJo’s personality factors into her choreography

“In each of our dances, I’ve been trying to channel a different JoJo. She’s this huge personality, and I think a lot of people think she’s always loud, and always kind of obnoxious and in your face. After getting to know her and spending every day in rehearsals together, I’ve got to know many different sides of JoJo. She is pretty serious. She is very concentrated. She does want to be sassy and she does want to be sexy. This is the first time she’s tapping into these different sides of herself. I always want to do the unexpected. The safe option would always be doing cheeseball, fun fun fun, all the time. But it’s even harder for her to channel these different energies and emotions. My goal has been to do the opposite of what everyone expects from her, and also what she expects from herself.”

Dancing With the Stars airs Mondays at 8 p.m. on ABC. Text “JOJO” to 21523 to vote for JoJo Siwa and Jenna Johnson.