Look at how time flies. Britney Spears’ kids aren’t the small children they used to be, and these photos show just how much they’ve grown over the years.

Britney and her ex-husband, Kevin Federline, share two sons: Sean Preston, who was born in 2005, and Jayden James, who was born in 2006. Britney and K-Fed, who met at a club in Hollywood in 2004 and started dating soon after, were married from 2004 to 2007. Their divorce—which came a year before Britney was placed under a conservatorship by her father, Jamie Spears—was finalized in July 2007, with Britney and K-Fed agreeing to joint custody of Sean Preston and Jayden James. In September 2019, K-Fed and Britney changed their custody agreement from 50/50 to 70/30, with 70 percent to Kevin and 30 percent to Britney. K-Fed’s lawyer, Mark Vincent Kaplan, explained to People in 2021 why Britney and her ex-husband have an unequal custody agreement.

“The best thing would be for their mom to be healthy and happy. And if either of those things aren’t true, it doesn’t provide for the best setting for custody to be exercised,” Kaplan said. K-Fed’s lawyer did, however, note that K-Fed is open to a change in custody once Britney’s conservatorship ends. “If [the conservatorship is] no longer necessary, that’s great too. Just want to make sure that all of the considerations, how she’s doing are taken into account if she seeks to change the custody order in the post-conservatorship era, if that ever comes.”

A source told Us Weekly in March 2021 that Britney sees her sons “less” now that their custody agreement changed. “She used to have more time with them until Kevin altered their custody arrangement after the incident with, Jamie. Since then, the boys’ visits have been less frequent,” the source said. “They spend most of their time at their dad’s house and have very few visits with their mom, especially overnight ones…They are teenagers now and want to be with their friends, not their parents. It’s nothing against Britney; they love and idolize her, and Kevin trusts her. It’s just that they’re getting older, so when they’re not at their main home with Kevin, they’re usually out doing things with friends.” The insider also claimed Britney sees her sons “periodically” and they don’t have a “set schedule.” Despite this, the source noted that Sean Preston and Jayden are “normal boys” who “just want to see their mom happy.”

So what do Britney Spears’ kids look like now? Read on ahead to see how much Sean Preston and Jayden James have grown up since Britney’s conservatorship started. Kevin’s friend, Eddie Morales, posted a photo of Sean Preston and Jayden James, now 16 and 15 respectively, in October 2021. The picture showed the teenagers posing with their family friend as they held up peace signs. “During times of grief knowing u have #family really feels worth living .. talk bout seeing my nephews when they were pods smaller then my hands now look at #life how beautiful gods work is … love you bro @federline4real #unlikenoother #trueGentlemen #Friends #brothers,” Eddie captioned the picture. Britney posted a photo of her, Sean Preston and Jayden James on a hike in March 2021. The photo showed the trio with masks on as they posed at sunset. Sean Preston was 15 at the time, while Jayden James was 14.

“It’s so crazy how time flies …. My boys are so big now 👩‍👦‍👦 !!!! I know … I know … it’s very hard for any mama especially a mama with boys seeing them grow up so fast !!!!” Britney wrote in the caption. “Talk about enough to make you go to your knees … GEEZ !!!! I’m extremely lucky because my two babies are such gentleman and so kind that I must have done something right 🙊 !!!! I haven’t posted pictures of them for some time cause they’re at the age where they want to express their own identities and I totally get it ….” Britney continued, “But I went out of my way to make this cool edit 🌅 and guess what …. They’re finally letting me post it !!! Now I don’t feel left out anymore 😂😂😂 and I’m gonna go celebrate …. Oh shit I guess cool moms don’t do that … Ok I’ll just read a book instead 🤷🏼‍♀️📚🤣 !!!!” 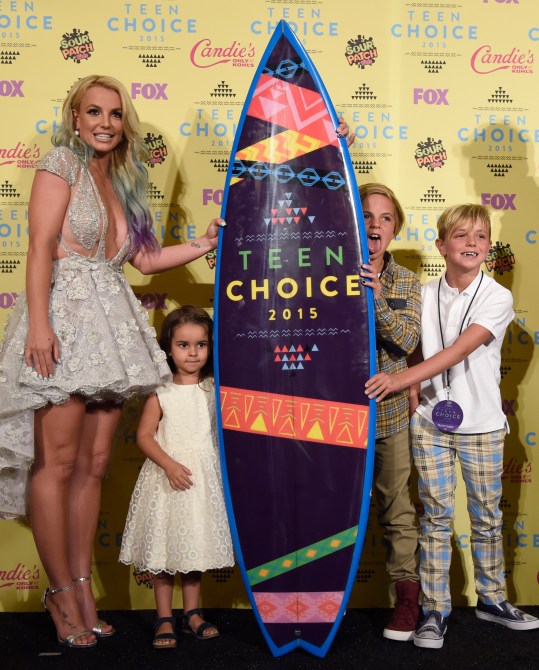 Britney, Sean Preston, Jayden James and Britney’s niece, Lexie, walked the red carpet at the 2015 Teen Choice Awards at the Galen Center in Los Angeles, where she was awarded the “Candie’s Choice Style Icon.” Britney was also nominated for Choice Music Single: Female Artist and Choice Music: Collaboration for her song “Pretty Girls” with Iggy Azalea. Sean Preston was 11 at the time, while Jayden James was 10. Lexie, who is the daughter of Britney’s brother Bryan and his wife Graciella, was 4 at the time. 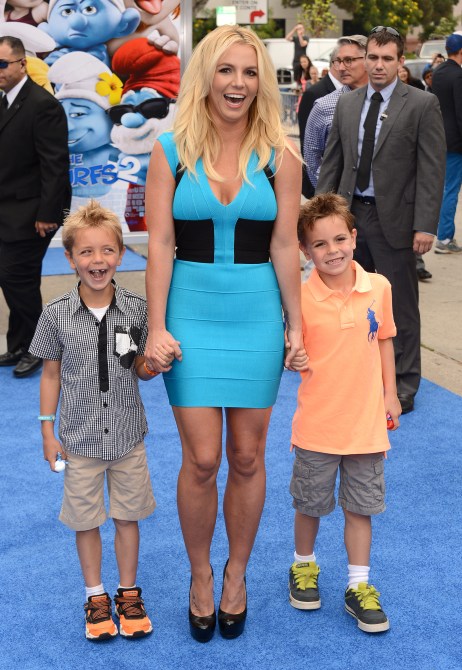 Britney walked the blue carpet at the premiere of Smurfs 2 with Sean Preston and Jayden James, who were 9 and 8 at the time respectively. The premiere was at the Regency Village Theatre in Westwood, Los Angeles. Britney sang the song “Ooh La La” for the movie’s soundtrack. 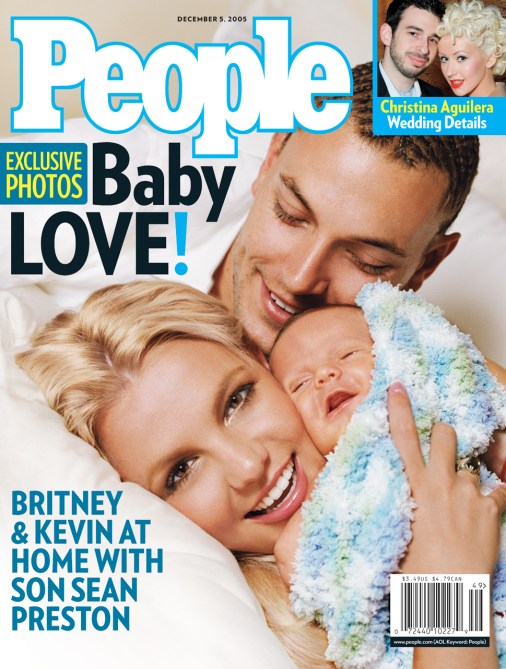 Britney and Kevin posed for People magazine’s December 2005 cover with their son, Sean Preston, who was born on September 14, 2005. Sean Preston is Britney’s first child. The cover showed Britney and Sean Preston curled up in bed as K-Fed smiled down at them. “Baby love! Britney & Kevin at home with son Sean Preston,” the headline reads.

Controlling Britney Spears is available to stream on Hulu. Here’s how to watch it for free.

For more about Britney Spears, read her 2001 book, A Mother’s Gift. The semi-autobiographical fiction novel, which was co-written with Britney’s mother Lynne Spears, follows Holly Faye Lovell, a 14-year-old girl from the small town of Biscay, Mississippi, who has dreams of becoming a singer. When Holly becomes the youngest student ever to win a scholarship to the prestigious Haverty School of Music, she must make a choice of whether to leave her mother, Wanda, behind or pursue her dreams. As Holly starts her new life and makes posh new friends, she finds herself embarrassed by her mom and their humble background, as Wanda struggles with a long-hidden secret that could destroy her bond with her daughter forever.